Ivan, a 25-year-old gay man from Uganda, entered the U.S. on Christmas Day 2018 when he crossed the Rio Grande from Ciudad Juárez, Mexico, to El Paso, Texas.

Ivan told the Washington Blade during an interview at the offices of Alianza of New Mexico, a Las Cruces-based HIV/AIDS service organization, on July 15 that anti-gay discrimination and his family’s decision to reject him because of his sexual orientation prompted him to leave Uganda.

Ivan said he received a lawyer from Las Cruces when he was in U.S. Immigration and Customs Enforcement custody in El Paso. Ivan had a second lawyer after ICE transferred him to a detention center in Houston.

Ivan, who asked the Blade not to publish his last name or picture, said he won his asylum case on July 9. Ivan said a volunteer with Advocate Visitors with Immigrants in Detention (AVID) in the Chihuahuan Desert, a Las Cruces-based group that visits migrants who are in detention facilities, helped him get a bus ticket from Houston to Las Cruces where he currently lives with PFLAG Las Cruces President Ryan Steinmetz.

“It’s good, though a little bit hot,” said Ivan when the Blade asked whether he likes Las Cruces. The temperature in the city was over 100 degrees on July 15. “I’ve never been to such a hot climate.”

Las Cruces, which is in New Mexico’s Mesilla Valley through which the Rio Grande flows, is less than 50 miles north of El Paso and the U.S.-Mexico border. PFLAG Las Cruces is among the local advocacy groups that have begun to assist migrants.

Steinmetz said before the Blade interviewed Ivan that PFLAG Las Cruces’ Rainbow Refugee Project began after a local advocacy group asked for housing for two gay couples who ICE was going to release on bond.

“I first said that I can do this because I had the space in my house to be able to house them,” said Steinmetz. “But I went to PFLAG Las Cruces … and said I want to know if PFLAG is behind this and could support these gentlemen during their time here and they were.”

“That was essentially what allowed for them to be released because so many of them did not get released,” Steinmetz told the Blade. “We were able to show that they had that community support, they had a place to go and they had an entire community that was wrapping their arms around them with other support services, and donations and things like that.”

Three of these men are from Guatemala, and were “severely discriminated against and abused for being gay,” according to Steinmetz. He told the Blade one of the men was in a coma for a month and lost sight in an eye after his stepfather beat him because he is gay.

Steinmetz said a group of criminals who “were trying to clean the streets of ‘drogadictos e homosexuales’ (drug addicts and homosexuals)” added the same man’s name to a list “to be taken care of.” Steinmetz told the Blade the man whose stepfather beat him, his partner and a handful of other gay men traveled through Mexico on a freight train known as “La Bestía” (the Beast) before they reached the U.S.-Mexico border.

Steinmetz said the men tried to cross a bridge from Ciudad Juárez to El Paso three times in order to ask for asylum, but U.S. officials denied their request, “saying that you Guatemalans, you have diseases, you’re not allowed to come in or whatever.” Steinmetz told the Blade they used a tunnel to cross the border and enter the U.S. in Sunland Park, N.M.

“They crossed in a way that was illegal for them to cross,” said Steinmetz. “But they felt they had no other options because they couldn’t return to where they were from. And they needed to ask for asylum.”

Margaret Brown Vega and Nathan Craig, who volunteer with the organization, on July 15 during an interview at their Las Cruces home showed the Blade a picture they received from a gay asylum seeker who drew it when he was in solitary confinement at the Otero County Processing Center, an ICE detention facility in Chaparral, N.M., that the Management and Training Corporation, a company that operates prisons across the country, runs.

Craig said he and other AVID volunteers visited the man and three other gay men who ICE detained at the facility after they and a group of more than a dozen other LGBT migrants from Mexico and Central America asked for asylum in the U.S. in Nogales, Ariz., in 2017. Craig told the Blade two of the gay men, including the one who drew the picture, won their asylum cases and now live in New York. 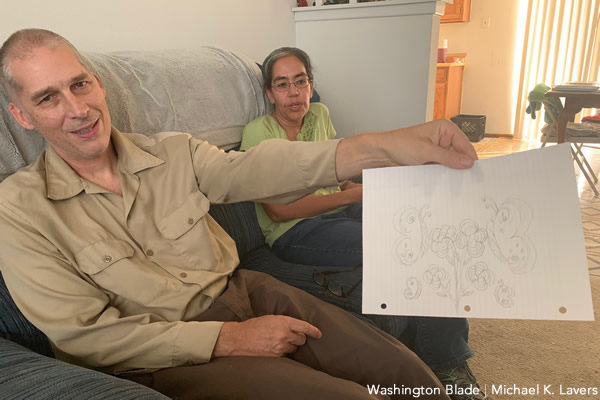 Vega and Craig spoke with the Blade less than six weeks after Johana “Joa” Medina León, a transgender woman from El Salvador, died at El Paso’s Del Sol Medical Center three days after ICE released her from their custody.

Medina had been detained at the Otero County Processing Center.

Craig said he and other AVID volunteers visited one of Medina’s podmates “who was expressing concern for several weeks about Johana’s declining health.” Vega told the Blade the three other trans women with whom Medina was detained found out she had died on the news.

“We go to the facility once a week and we knew we couldn’t get there beforehand,” said Vega. “There’s no way to reach people in detention. You have to wait for them to reach out and we were concerned they were going to hear about it.”

“It was strange to us the facility staff didn’t bother to tell them,” she added. “They thought she was still in the facility, but in medical isolation because that’s why she was taken out from where they were at.” 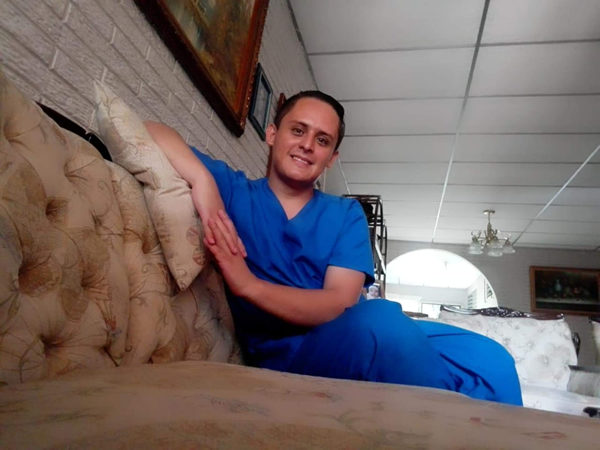 The Blade’s visit to Las Cruces took place against the backdrop of continued outrage over President Trump’s hardline immigration policies, his racist and anti-immigrant rhetoric and the treatment of migrants in ICE custody.

The White House on July 15 announced it will end asylum protections for most migrants who arrive at the U.S.-Mexico border. Guatemalan President Jimmy Morales’ government less than two weeks later signed a “safe third country” agreement with the Trump administration that requires migrants who pass through Guatemala on their way to the U.S. to first seek asylum in the country.

The U.S. has forced thousands of asylum seekers to return to Ciudad Juárez and other Mexican border cities under the so-called Remain in Mexico program to await processing of their claims.

ICE in 2017 opened a unit for trans detainees at the Cibola County Correctional Center, a detention center in Milan, N.M., that CoreCivic, a private company that was once known as Corrections Corporation of America, operates.

The Blade is among the handful of media outlets that ICE invited to tour the unit on June 12. Trans Queer Pueblo, a Phoenix-based group that advocates on behalf of undocumented LGBT immigrants, on June 26 received a letter from 29 trans women at the Cibola County Correctional Center in which they complain about inadequate medical care and mistreatment from staff.

The tweet notes the staffers met with the facility’s warden, Ray Terry, and officials from ICE and Management and Training Corporation.

“Representatives from Sen. Udall and Sen. Heinrich’s staffs toured the Otero County Processing Center last Friday, May 31st, and held a meeting with the warden of the facility, as well as ICE officials and the individuals representing the independent contractor operating at the facility,” reads a statement from the senators’ spokespeople. “During their tour, representatives from Udall and Heinrich’s office (sic) raised concerns about the treatment and conditions for transgender and other LGBT individuals in detention at the facility.”

“At no point during the meeting did the OCPC (Otero County Processing Center) or ICE officials inform our staffs that a transgender individual who had been in U.S. custody had fallen ill, and was admitted to the hospital for treatment for serious medical issues,” adds the statement. “The senators believe that ICE should be fully transparent and publicly disclose all relevant information regarding this tragic and disturbing situation, and they continue to push for humane treatment for asylum seekers and for real solutions to this humanitarian crisis.” 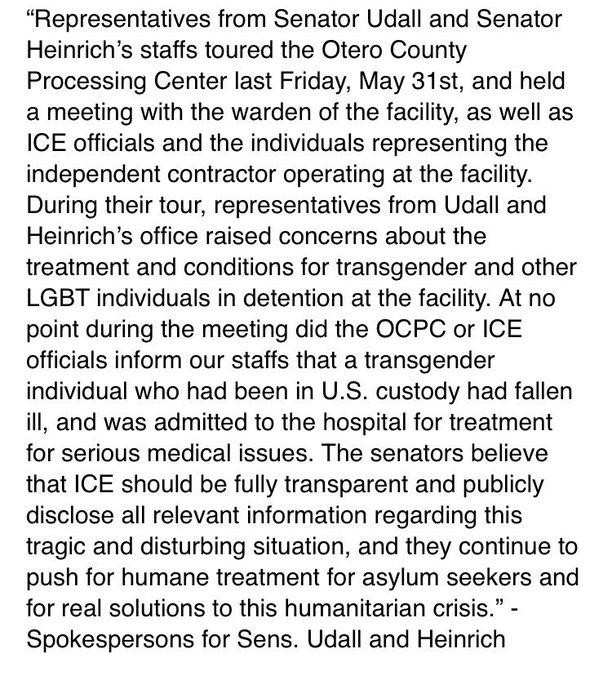 51 people are talking about this

“We were doing some thing to raise the alarm, but not enough,” Craig told the Blade as he and Vega discussed Medina’s death and the circumstances that surround it. “We’ve certainly resolved ourselves to be much louder about those kinds of concerns since that took place.”

Craig said other trans women who are detained at the Otero County Processing Center have said they have been harassed after Medina’s death. Craig and Vega also told the Blade the detainees have complained about a lack of access to hormones and food.

“They go to bed hungry,” said Vega. “So, people just get used to being hungry all the time.”

Ivan told the Blade he did not experience discrimination because of his sexual orientation when he was in ICE custody. Ivan did acknowledge trans people were separated from other detainees.

“I wasn’t discriminated against, though the discrimination I did see was the transgenders,” he said. “They are kept in the shoe.”

Ivan also told the Blade he wanted to study tourism in Uganda, but his family didn’t support his education “because I’m a homosexual.” He said he would like to return to school and travel to other parts of the U.S.

“You never know what comes around the way,” said Ivan. “I have a passion for traveling. I would like to go to other states and see how other people spend their time.”