TEGUCIGALPA, Honduras — Roxsana Hernández was a transgender woman with HIV from Comayagua, a city that is roughly 50 miles northwest of the Honduran capital of Tegucigalpa.Hernández on May 9, 2018, asked for asylum in the U.S. at the San Ysidro Port of Entry in San Diego after she joined a migrant caravan that left Honduras a few months earlier. Hernández died at a New Mexico hospital 16 days later while in U.S. Immigration and Customs Enforcement custody.

The New Mexico Office of the Medical Investigator last April announced an autopsy it performed on Hernández found she died from Castleman disease associated with AIDS. The Transgender Law Center, which represents Hernández’s family in a wrongful death lawsuit, released the findings of a second autopsy that found Hernández suffered “physical abuse.”The second autopsy also concluded the cause of death was “most probably severe complications of dehydration superimposed upon HIV infection, with the probable presence of one or more opportunistic infections.”Rihanna Ferrera, director of Asociación de Derechos Humanos Cozumel Trans, a trans Honduran advocacy group, on Jan. 22 told the Washington Blade during an interview in Tegucigalpa that Hernández decided to leave Honduras, in part, because she wanted access to better antiretroviral drugs.“She left in search of a better life, a better quality of life, better medications,” said Ferrera.

Hernández’s case underscores the precarious situation in which many Hondurans with HIV face because of a combination of factors that include poverty and a lack of access to treatment. It also highlights the plight of LGBTQ Hondurans who have decided to leave their country.

The report identifies trans Hondurans as one of “the key populations most affected by HIV” in the country. It notes 8.2 percent of trans Hondurans lived with HIV in 2018.The Honduran Congress in 1999 passed the Special Law on HIV/AIDS in response to the epidemic. It also created the National AIDS Commission in order to help protect the rights of Hondurans with HIV/AIDS.A Honduran government spokesperson on Tuesday provided the Blade a copy of a guidefor civil servants on human rights-related issues. The document notes Honduras’ Public Policy and National Action Plan on Human Rights includes an advisory council with members who include representatives of groups that advocate on behalf of “people with or affected by HIV,” migrants, LGBTQ people, Hondurans of indigenous and African descent and other vulnerable groups.

The U.S. Agency for International Development and the Global Fund to Fight AIDS, Tuberculosis and Malaria are among the international organizations that have also provided financial support to the fight against HIV/AIDS in Honduras.Ferrera said many Hondurans with HIV/AIDS remain vulnerable, despite the aforementioned efforts.“People living with HIV are people,” she said. 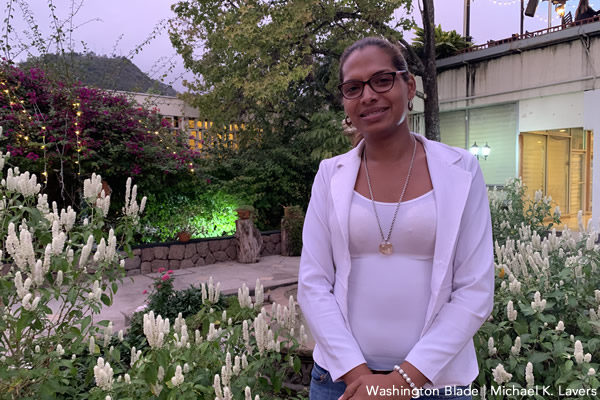 Ferrara in 2017 ran for the Honduran congress as a candidate for the center-left Innovation and Unity Party (PINU).Ferrera’s sister, Bessy Ferrera, who was also trans, was murdered in Comayagüela, which borders Tegucigalpa in Honduras’ Central District, on July 8, 2019.

Ferrara spoke with the Blade hours after she attended a court hearing for the two men who have been charged with her sister’s death.Ferrara told the Blade one of the two people who witnessed her sister’s murder “had to leave the country because of fear that something may happen to them,” even though the Honduran government placed them under protection. Ferrara said the other witness “does not” want to testify in court.Ferrara said none of her relatives attended the hearing because they rejected her and her sister over their gender identity.

Ferrara told the Blade “the first thing” that members of her family told her when she arrived at the cemetery after her sister’s murder is “we don’t want to bury a faggot in front of all of my relatives.” Ferrara said Cattrachas, a Tegucigalpa-based lesbian feminist network that documents the murders of LGBTQ Hondurans, offered to pay for her sister’s funeral.“There was a change — a dramatic change — in my life on July 8, 2019,” Ferrara told the Blade.“Now I am alone in this country because I don’t have any family,” she added.Honduras continues to have one of the world’s highest per capita murder rates because of violence frequently associated with gangs and drug traffickers. Violence based on sexual orientation and gender identity remains one of the main factors that prompts LGBTQ Hondurans to leave the country.

Ferrara told the Blade she was planning to leave Honduras before her sister’s murder.“What happened happened and I decided that I could not go,” she said.Ferrara said she would like to come to the U.S. and work with American LGBTQ organizations on immigration-related issues.Ferrara told the Blade she would like to seek asylum, but “not while in detention.” She added she has a visa that would allow her to enter the U.S. at a legal port of entry without entering custody.“It is the best option,” said Ferrara.